A girl's guide to gadgets. All the best female-friendly tech around - including MP3 players, phones, laptops, digital cameras and any other bit of handy consumer gadgetry. 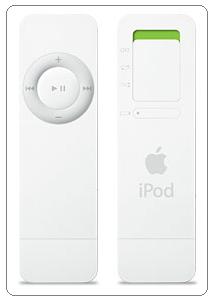 Brits will be waking up tomorrow into a world that has a flash-based iPod music player. Yes, Apple has finally caved in and designed a portable music player that weighs pretty much nothing and won't jump when you go for those jogs you keep telling everyone you're going to start going on. The iPod Shuffle player is unlike all other tiny flash players in that it doesn't come with an LCD preview screen for seeing what's playing and selecting the next track. The idea being that most of us listen to our iPods on Shuffle anyway so why not do the same with a flash player. If you're one of those people who can't bear random (what's a polite way of saying "control freak"?) you can flick the switch to hear your tunes in order. The iPod Shuffle is out now in the US ($99 for the 512MB/120 tracks version; $149 for the 1GB version/240 tracks version) so we'll be expecting it here sometime before Christmas 2007 if the iPod mini farrago was anything to go by. 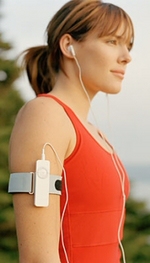 Accessories look likely to be a big feature of the Shuffle. Here's a nice photo of a lady in gym wear with the Shuffle strapped around her well-toned arms.

Other accessories include a dock that you can leave permanently plugged into your computer, a sports case that you can wear round your neck, and a battery add-on. The price for all the items (including the arm band) is £19. 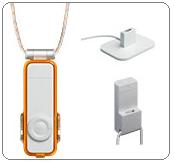 Posted by Aigua Media on January 11, 2005 in MP3 and Media Players | Permalink

ABOUT SHINY MEDIA
ADVERTISE ON SHINY SHINY
SUBSCRIBE TO THE NEWSLETTER!
SEND US YOUR TIPS!
SHINY SHINY'S MYSPACE